Interview made by Cormac O'Síocháin for Zero Tolerance #27. 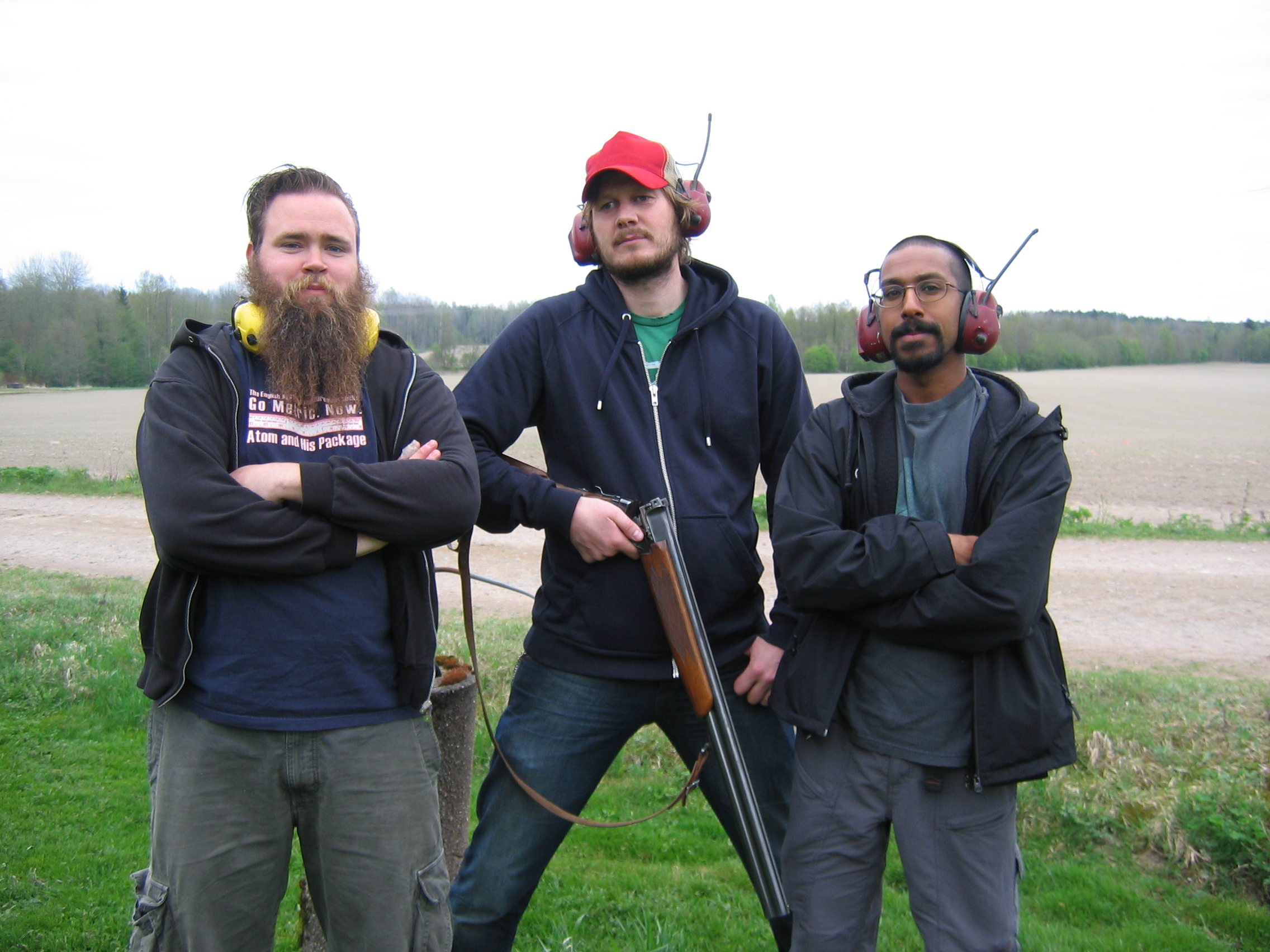 1. You've been going for quite a while, slowly building up steam but avoiding the hype...why don't you print
t-shirts with the silhouette of a bird on it and put more octave chords in?

Johan: As a matter of fact, we're planning something like that. Haven't you heard the intro on our latest cd –
air raid siren, howling wind, doomsday bird? This is our vengeance after laying low for a while.
Ola: We decided to make some money off the idiots, so we now have a crusty bird shirt.
Indy: What the fuck is an octave chord?

2. Most Swedish bands these days are on the crusty d-beat train...you guys are going somewhere else. Get
with the program will you? Too cool for Discharge?

Johan: Hrm... Discharge - probably the most overrated band in history. But it's perfectly fine to us that all
shitty crust bands hail them as kings and try to sound just like them - it just makes us even more superior.
By the way, British music suck - we like America.
Indy: Haha, Discharge! We broke up with them fifty years ago. Let me quote Eddie Murphy here: "What
have you done for me lately?"

3. Why are Scandinavians so arrogant? Is it because the Vikings stole all the beautiful women from countries
like Ireland and England and now you're all gorgeous (except for Massgrav, obviously)?

Johan: Yeah right... Hell, when the vikings came to the UK they were so frightened by the ugliness of the brits
that they jumped back on their ships and sailed home. Everybody knows that the British people are, by far,
the ugliest on the globe; pale with red hair and bad teeth... Knowing that, it's hard not to be arrogant towards
you.
Ola: As Mats Rådberg (Swedish country star) once sang; it's hard to be humble when you're so superior, that
pretty much explains it all. That said, I think we're a lot nicer than most fuck-ups we meet.

4. Describe each of the following in five to ten words:

Sweden: Land of the free, home of the brave.
Denmark: A shithole full of alcoholics with porrigde in their throats.
Norway: The home of the black metal elite - obviously a joke. False Norwegian Black Metal.
Finland. Häärpiiillaaamaartisääättii... Yeah, something like that.

5. You seem pretty angry? Why don't you just find a good therapist instead of playing bad music? Is it just
because you weren't gorgeous enough to have a band like Abba, The Sounds or DS-13? Admit it: Massgrav
is based on jealousy rather than hate.

Johan: Massgrav is based on money and good songs, I guess this must be the reason why we're not that
big in the UK... You are all too poor and can't tell a good song from a bad. Abba, The Sounds and DS-13
were more based on the chicks-with-dicks thing... not my cup of tea.
Ola: If we're so bad, how come you're writing about us in your fucking midget mag?

6. The new one's even faster than the others. When does it go from being fast hardcore to being melodic
grindcore?

Johan: That won't happen since Massgrav is for the elite and grindcore's for losers. And by the way -
we are a rock'n'roll band, so fuck off.
Ola: When hell freezes over, that's when.
Indy: Who cares when our next album will be all about experimental doom?

7. Do you consider yourselves punks? Why? Aren't punks just arsehole hippies who smell like piss and
hate their parents?

Johan: No we don't. Because we're successful. Yes they are.
Ola: We are intelligent, adult people, fully aware of the advantages of personal hygiene. So no, we
don't consider ourselves punks.
Indy: No. I said no. Yes.

8. Shouldn't punk be dangerous and threatening as well as empowering and defiant? Where did all the
fucking rules come from?

Johan: I don't know, I play rock'n'roll so I can make the girls go wild and pay my bills. Who cares about
being dangerous and defiant... Fuck that shit.
Ola: The rules normally come from people who don't even have the imagination to be in a crappy band,
so instead they hang around and call themselves "the scene", scramble together incoherent texts for
really bad toilet paper (aka "fanzines") and waste their time on various forums, talking shit.
Indy: That's what's so funny about all these punks, hardcore crews and crusties – they are as far away
from anarchy as you could possibly be. They wouldn't last long if chaos erupted, that's for sure. Survival
of the fittest, baby. And the punks ain't fit.

9. You've been in a few scrapes with the PC brigade, eh? What do you think has changed about the
underground punk scene since the '80s? What's for the worse, and what's for the better?

Johan: I've never cared about the so called scene. I'd rather spend my time at the golf course or in the
slopes of Val d'Isere than hanging out at some shitty gig with lowlife punks. If it wasn't for all the money
we're making Massgrav wouldn't play live at all.
Ola: Talking to the oldsters, one thing that has definitely improved is the number of people who are
interested - Bands like Mob 47 and Raped Teenagers for example seem to have done their fair share of
gigs for 20 unimpressed people. But yeah, people with a giant stick up their ass seem to have a huge
problem with us, which they probably wouldn't have if they were intelligent enough to actuallly take time
to find out what we're about.
Indy: I have no clue about the underground punk scene in the '80s, to tell you the truth, but I reckon it
was a lot more punkish back then, while today's scene seems to be about behaving as the majority wants
you to behave, i.e. to be exactly like everybody else in the scene, or else you're out. If you're into fascism,
I guess that's good.

10. The word on the street is that you actively encourage rape at your concerts?

Johan: Fuck the streets, fuck the punks. The shithead that spread that rumour has paid for his mistake
and hasn't been seen for a while.
Ola: That gig was great though, the crust as fuck audience didn't like our new song "All punks are whores"
and I've never had so many beer glasses thrown at me in my life.
Indy: The word on the street is that the fuck up who spread that rumour got his ass raped in Rio de Janero
a couple of weeks ago.